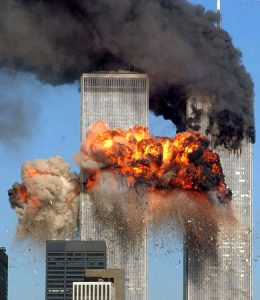 On September 11, 2001, 19 militants associated with the Islamic terrorist group Al-Qaeda hijacked an American Airlines Boeing 767 loaded with 20,000 gallons of jet fuel and carried out suicide attacks throughout the United States. The twin towers of the World Trade Center in New York City as well as the Pentagon were targeted by the terrorist hijackers. As a result of this tragedy, 3,000 people were brutally killed.

We must never forget that the attackers were Islamic terrorists who were completely financed by Al-Qaeda. 17 years later, families are still searching for the remains of their victims.

Today, we mourn with the American people, and side with them against all Militant Islamists who wish to bring harm to its people.